Question: What’s an Australian with guitars and a drum doing in Colne, England?

One of the acts that I wanted to see during my “Artist-in-Residency” at The Great British Rhythm & Blues Festival 2017 was Gwyn Ashton. I found a place to stand to sketch Gwyn during his performance and whilst sketching him I felt sure that there was a painting from this gig. I really liked the strong spotlight on him which produced a strong chiaroscuro. I have been starting paintings from the festival in the order in which the acts appeared and as Gwyn Ashton took the stage on the final day of the festival, this painting has taken a while to come to fruition. I started it at least two or three weeks ago and have been working it and re-working it more intensely over the last week or so.

Yesterday I left the studio thinking “Gwyn Ashton @TGBR&BF ’17” might just be finished. I was wrong. I spent most of today making minor adjustments and finally this afternoon I decided that I had better call it finished before I tweak it to death! There is often the danger that any freshness or vitality that a painting may possess can be slowly removed by over-working it. Hopefully I have achieved a balance in working it towards a sound resolution without squeezing the living daylights out of it.

Below are a couple of close-up details: 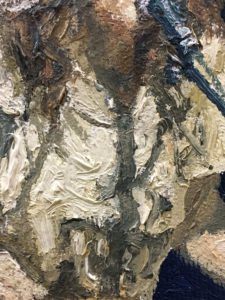 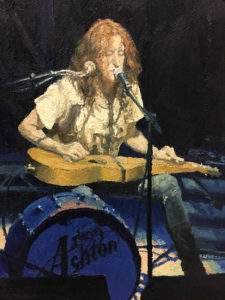 …and here’s the final canvas 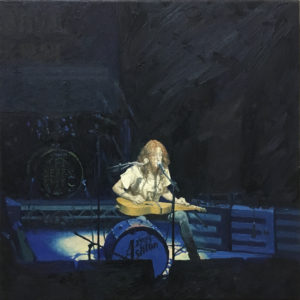 Full details regarding this painting are at: https://petemarshart.co.uk/painting/gwyn-ashton-tgbrbf-17/