I had been promising myself to see the Kaz Hawkins Band for some time but every time Kaz was anywhere near the North West of England something seemed to crop up and prevent me from going. As “Artist-in-Residence” at The Great British Rhythm and Blues Festival in Colne last year I had an extensive list of acts that I wanted to see. Making decisions on who to see at the cost of who not to see was terribly difficult but Kaz Hawkins was an easy one for I was determined to finally catch up with her!

The painting was started some time ago, well before Christmas. I had studied my live sketches done during the band’s set, I had digitally manipulated a number of photographs that I had taken during the gig and the canvas had been prepared. Unfortunately my studio (in an old cotton mill) is extremely cold at this time of year and whilst extra layers provide me with adequate warmth some oil paint colours can take an age to dry! Some areas of my Kaz Hawkins canvas have remained wet for over two weeks! I often work alla prima (wet on wet) but I also regularly use scumbling (dragging a relatively dry brush over the surface to achieve “broken” colour and/or tone). Scumbling requires the under-painting to be completely dry before commencing and guess what? Yes, I wanted to scumble over a number of areas of the Kaz Hawkins Band painting. I almost always have a number of paintings in various stages of development so I have used the past fortnight to re-work other paintings from Colne Blues along with paintings from other gigs.

“Kaz Hawkins Band at TGBR&BF ’17” is still UNFINISHED but here it is at its latest stage of development…there’s plenty still to do but this afternoon’s session has moved it nearer to completion. I hope you like how it’s progressing…please see below to see the painting at three different stages along with sketches and trace mono-prints…the finished painting will, eventually, be posted on here..when complete. 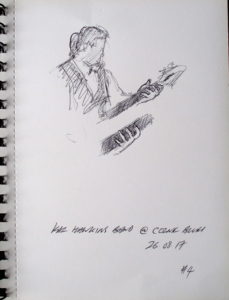 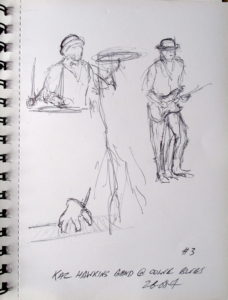 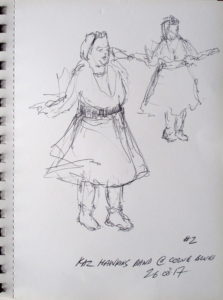 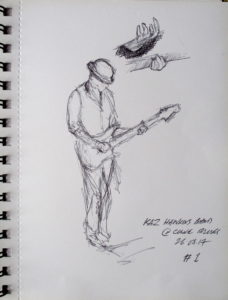 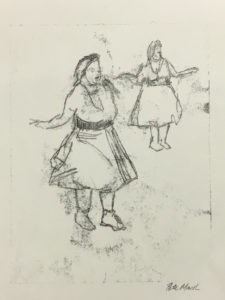 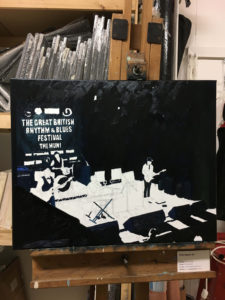 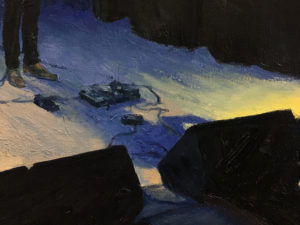 The finished painting along with all information can be found at: https://petemarshart.co.uk/painting/kaz-hawkins-band-tgbrbf-17/