I have recently been posting a “Stay positive” message on social media each day during the “lock-down”. In many ways this has been an attempt to remind people of the magic of live performance. It has also been to encourage musicians and music audiences that better times are ahead..but whilst remaining vigilant we need positive thoughts too. I am NOT suggesting that everything is alright. I can think of nothing more positive than the 2014 performance of Wilko Johnson at Mancheter Apollo.
This painting features Wilko Johnson, Norman Watt-Roy and Dylan Howe (represented by a little bit of his drum-kit). The music was great on the night but visually the gig was fascinating too. The stiff backed strutting of Wilko…and the way he glides across the stage wonderfully contrasted with the lithe contortions of Norman on bass. I’m trying to achieve something of that with this painting…Wilko with his rebellious, challenging, defiant, stubborn stare into the crowd and Norman who wriggles and bends into all manner of amazing shapes. Hopefully this will help to express something of the mood of the gig…from the music and the band’s perspective and also that of the audience. It was a pleasure to be there!
During the gig I mentioned to a friend that some of the lighting appeared blood-red in colour. This was poignant to me…most people will know about Wilko Johnson’s fight with cancer, indeed many us must have felt that this might be the last time we’d see him perform. The lighting was the colour of blood…life-blood! Here was a man LIVING life. I knew that I had to incorporate this in my painting together with some sort of expression of the man’s presence on stage. I wanted to use the long coil of his guitar lead as a sort of umbilical chord. Indeed it seems to represent a conduit for sustaining life. Food for a foetus or in this case electricity for that Telecaster. The correct pronunciation of the title of this painting is very important to me. It is called “Live” as in “to live” not as in “live performance”. It is pronounced “LIVV”. It is called “Live” because the painting is about LIVING life. Big, big thanks Wilko for the chance to experience that Sunday night at The Apollo! Here’s the painting…(also available as a limited edition high resolution Giclee print) 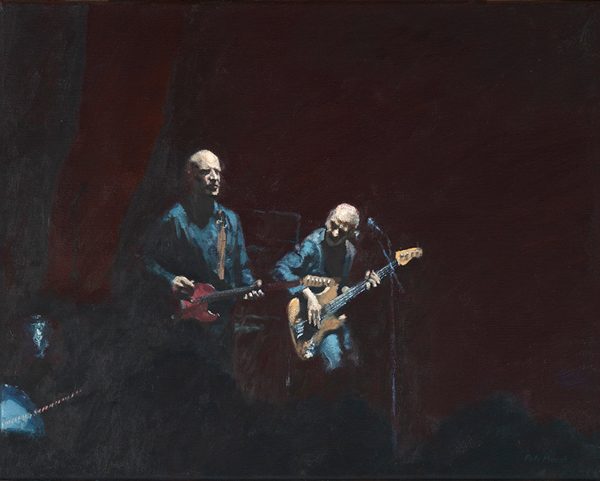