Update 16th May 2017…I’ve been working on an oil on canvas inspired by the performance of Walter Trout and his band. I think it could be finished…. 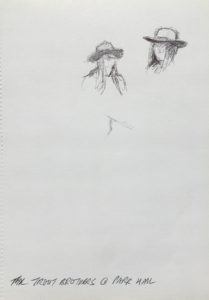 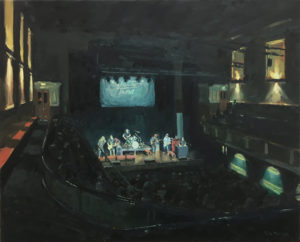 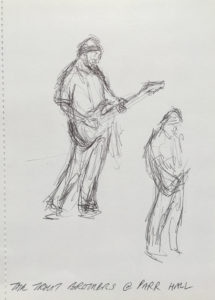 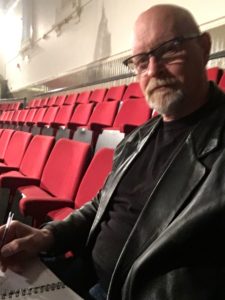 I knew as soon as I walked into this venue to sketch the sound-check that I wanted to paint from this gig. The performances that followed reinforced this determination and I just couldn’t wait to get into my studio to start it. The different spaces within the composition remind me a little of some of the American artist Edward Hopper’s work. I’ve included a little reference to Hopper….maybe someone will spot it…it’s quite subtle but a couple of my good friends may well just spot it. I posted an unfinished version of the work on Facebook and one very kind gentleman said that I “..had captured the soul of a Walter Trout performance.” I cannot begin to say how rewarding it is to receive these words.

My “office” yesterday afternoon was at Parr Hall, Warrington…sketching at the sound-check.

Last night I was privileged to attend Parr Hall, Warrington to see Walter Trout. As ever I wanted to get permission to sketch during the sound-check…the following sentence is becoming a mantra but it holds true for me: when you draw, you look, you really look and when you really look you really see. Taking photographs, using my memories and imagination are fine but as observational responses play a significant role in my work, drawing is very important to me.

On arrival I introduced myself to Dave who it turned out was promoting (along with lots of other things) the event. During our conversation we discovered that we had some experiences in common..mainly to do with my brief time in the music industry when I worked on the crew at International 1 and later Manchester Apollo…way back in the mid 1980’s. Dave introduced me to the Tour Manager, Andrew and I recognised him from when he was on a Kenny Wayne Shepherd tour a couple of years ago. From my website (using my mobile ‘phone) I showed him the two oil paintings and the lino-cut that had been inspired by Kenny Wayne Shepherd at Manchester Academy.

I also met the support band…the sons of Walter Trout! These guys were gracious enough to allow me to sketch during their sound-check and I even managed to get a couple of sketches done during their set. What a set they played…rocking the historic old hall and warming up the crowd for their Dad’s show.

The whole evening was truly spiritually uplifting…the music was great with great performances by all but there was something else about this show. Walter Trout spent a little time to explain the near to death experiences he had endured over the last few years and how he had come through it. The songs that came out of that period are powerful in all sorts of ways and of course I just had to have the new album “Battle Scars”. But there is more…there was something extremely special watching Walter Trout and the “boys” not only supporting Walter but also performing with him too. Great night….and I’m hoping that there’ll be a painting from this gig. All the drawings can be seen on my website under Music: Drawing.

Big thanks to Dave, Andrew and The Walter Trout Brothers for their hospitality..and to Walter Trout and his band for a great night’s entertainment!