On Friday 6th March 2020 my wife and I attended The Lowry Theatre in Salford, UK to see Swan Lake performed by Birmingham Royal Ballet. As an artist I have admired the works of Edgar Degas over many years but his work was not the inspiration behind my visit to see Swan Lake. As a boy I can remember my parents, particularly my father, being enraptured by ballet. I recall him watching ballet on the television but coming from a working class background he could not afford tickets to see a live performance. Live performance was the inspiration to see Swan Lake. Much of my work involves attempts to express something of the magic and atmosphere found at music concerts. For the last three years I have been Artist-in-Residence at The Great British Rhythm and Blues Festival and this along with other gigs has been the core of my artistic output in recent years. I only paint concerts that I have attended, turning down a number of commissions to paint bands or musicians where I have not been at the concert. The drama, lighting and music of live performance is my driving force so it seemed a natural move to studying a ballet performance. Tchaikovsky is one of my favourite composers so the choice of Swan Lake fitted perfectly with my plans.

I have not the articulation or eloquence to fully express in word just how much the performance of Swan Lake affected me. As we left the Lowry I turned to my wife, Mel, and said that I thought it was transcendental. I really do not know what else to say. I like to think that if I have any ability in adequately expressing myself it is with a brush or some other device for drawing or painting. Watching any live performance for me is a balancing act between two approaches. In no particular order, one approach involves a desire (or need) to carefully study what is before me in a visual sense, that is, to commit to memory lighting, colour, tone, composition, pose and anything else that will be useful for a painting. The slightest hint of a highlight on a fore-arm can be significant. Often this may be fleeting and I can spend much of the concert trying to witness the same effect in order to commit it to memory. If I am not careful I could spend the entire concert in this state of technical observation. The second approach is the desire and need to immerse myself in the spirit of the live performance. Technical observation of visual stimuli is all very well for producing a painting that is technically proficient but my goal is to attempt to express something of the atmosphere and mood of a live performance. It is not enough to produce a visual facsimile, after all anyone with a camera pointing in vaguely the right direction can achieve that. I must experience the performance, deeply and without the distraction of seeking the next painting. Each of these two approaches does not always demand exclusivity from the other..but sometimes I do have to remind myself that I should put down my (imaginary) brushes and allow the performance to permeate my soul. The words of the French painter, Corot, spring to mind,

“Beauty in art is truth bathed in an impression received from nature. I am struck upon seeing a certain place. While I strive for conscientious imitation, I yet never for an instant lose the emotion that has taken hold of me.”

Whilst working on a painting of a particular band I will often listen to that band’s music. Yesterday I finished the fifth oil-sketch inspired by Swan Lake and specifically, Celine Gittens, the Principal Ballerina. During the production of these studies I have been listening to Tchaikovsky. I hope these paintings express something of the beauty, balance, grace, power and drama (you see…I’ve run out of words!) of the Birmingham Royal Ballet’s performance of Swan Lake. The paintings were done relatively quickly over a period of five days. My studio paintings are usually worked on over a matter of weeks, sometimes month but when I paint in the landscape (en plein air) I will complete a painting in about two hours. Working quickly is necessitated by the the changing light. The Swan Lake series are all painted alla prima and each was completed within one working day…there may be a larger painting in the future produced over a longer period…. 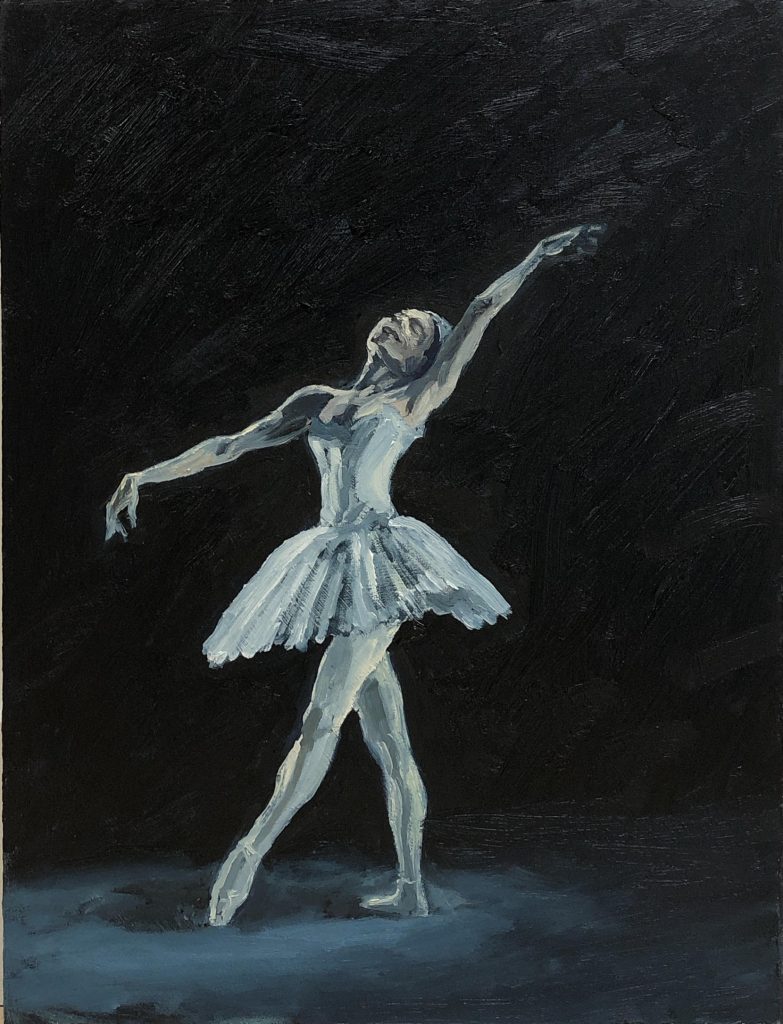 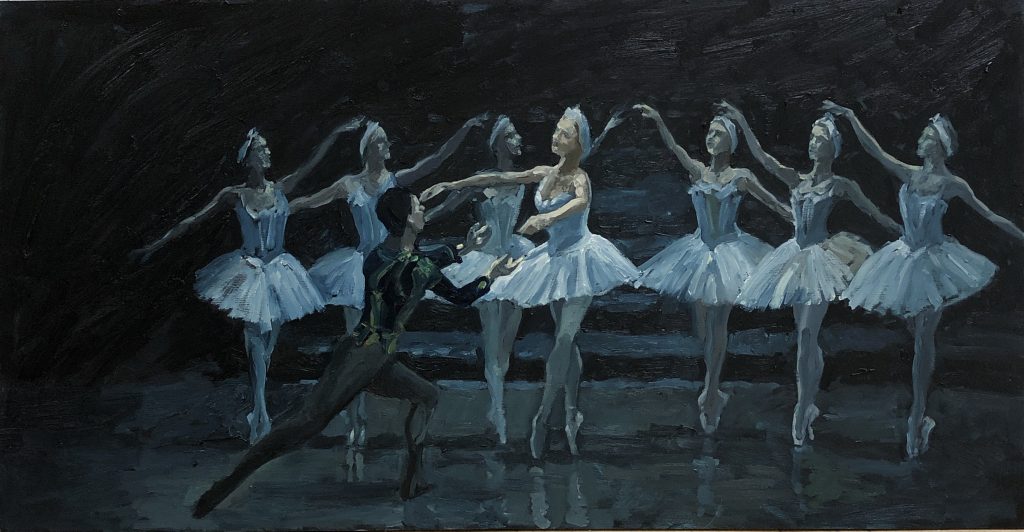 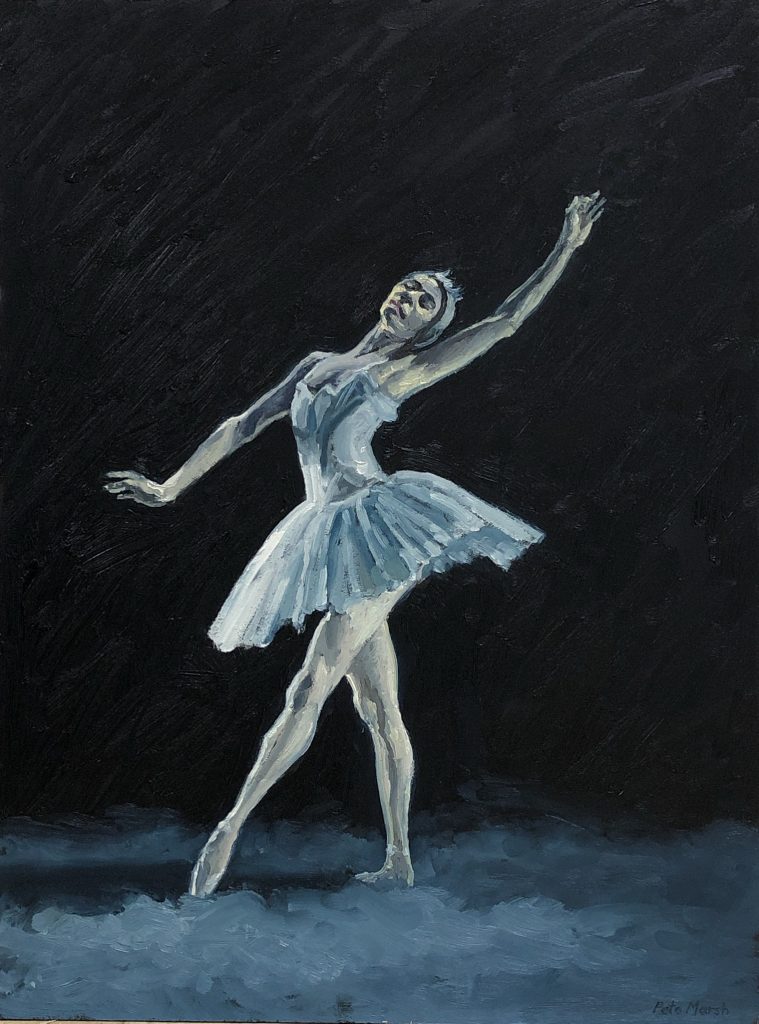 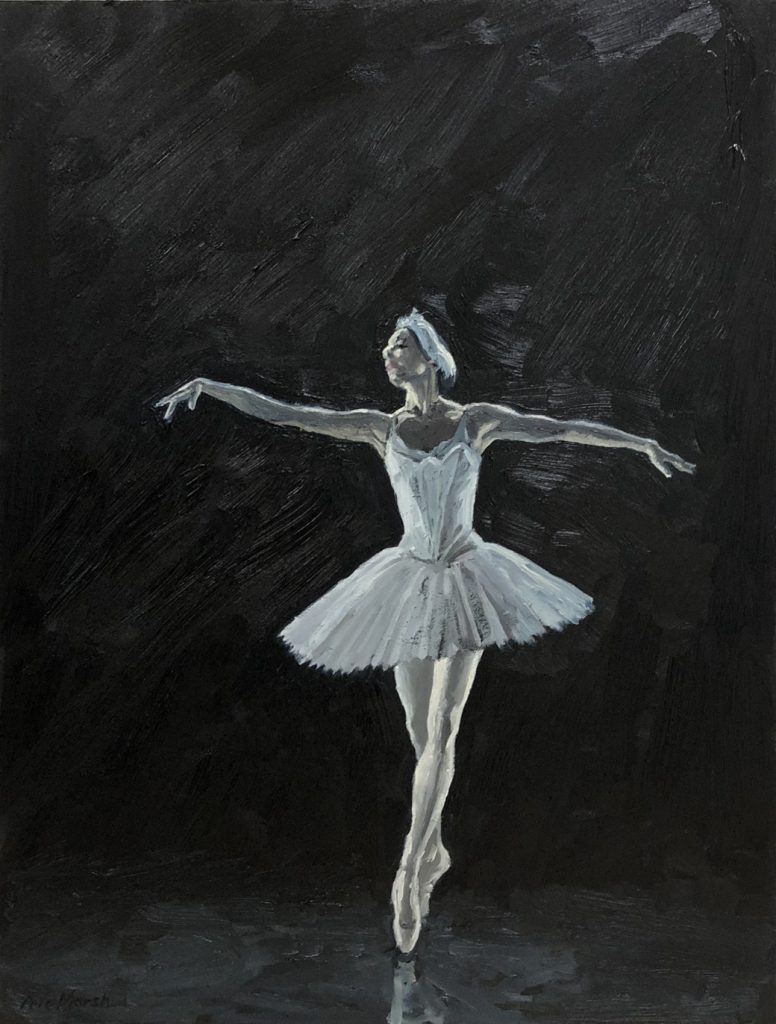 We use cookies to ensure that we give you the best experience on our website. Continuing to use this site assumes that you are happy to consent.Allow CookiesDeny CookiesPrivacy Policy