It is a while since I last exhibited work at The Manchester Art Fair, it was known as the Buy Art Fair in those days. Later this year I will be exhibiting a selection of paintings and original prints inspired by live music performance. I’ve mentioned this before (just once or twice, ahem) but I only paint gigs that I have attended. I have turned down a number of commissions to paint bands or musicians because I consider experiencing the live concert to be crucial to my work and if I have not been there..well, it would be just copying a photograph, wouldn’t it? I should add that I do use photography as a tool to produce my paintings but I also use live sketches (done at the gig), digital manipulation (Photoshop type editing programs), visual memories from the concert and the “vibe” from the gig. By “vibe” I mean feelings, emotions, sensations that I have experienced from actually being there….this is the thrust of my work, that is, trying to express the atmosphere of a live concert. Someone describing my painting “Walter Trout, Alive” said that I had “captured the soul of a Walter Trout gig”. I’m not sure this could be done without having been there.

Along with original paintings I will be exhibiting a selection of my printmaking including limited edition etchings, dry-points, lino-cuts, mono-prints and one or two “mono-print and mixed media” pieces. In no particular order works will include:

Some of the paintings are available at more affordable prices as limited edition, signed Giclee prints. All the original prints (etching, dry-point, lino-cut and mono-print) are limited editions. Come along and see my music inspired artworks, many of which are inspired by gigs in or around Manchester. 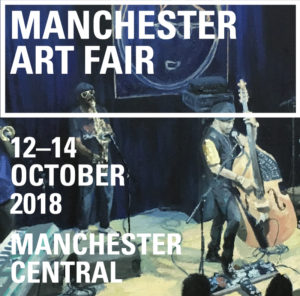