Black Sabbath, Pearl Jam and Slash in Saddleworth near Oldham?

This morning I delivered four paintings inspired by live performances at Manchester Arena by Black Sabbath, Slash and Pearl Jam. The Millyard Gallery in Uppermill, Saddleworth will be exhibiting these original paintings and will also be offering limited edition Giclee prints of all four paintings. 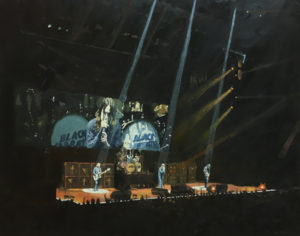 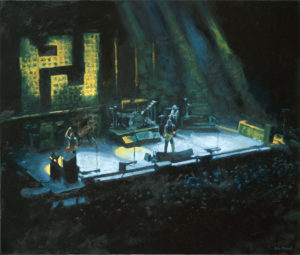 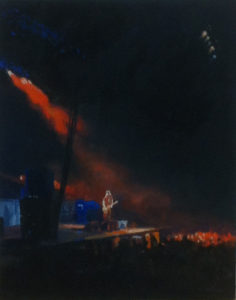 Here’s a copy of the information presented by Millyard Gallery:

During the mid-1980’s Pete was a member of the stage crew at The International Club, Manchester and subsequently at Manchester Apollo. This involved working at various venues including Birmingham NEC, St. George’s Hall Bradford, Preston Guildhall, Sheffield City Hall, Monsters of Rock (now known as “Download”), Roundhey Park, Leeds and various stadium shows. This interest in music can be seen in his artwork where he is less concerned with topographical detail but much more interested in the overall dynamic, mood and atmosphere of live performance. Whenever possible Pete prefers to work from life and will sketch members of a band during the sound-check. Paintings will be developed based on sketches from life, digital manipulation of photographs taken during the gig and carefully observed memories of both the sound-check and the live stage performance. Pete only paints concerts which he has attended, feeling that the first-hand experience of the atmosphere is crucial to his work.

2015 Public Art commission for Bolton Council and Bolton at Home, A666 subway.

2013 “The Art of Printmaking”, The Cooper Gallery, Barnsley, South Yorkshire.