The progress of an oil painting.. 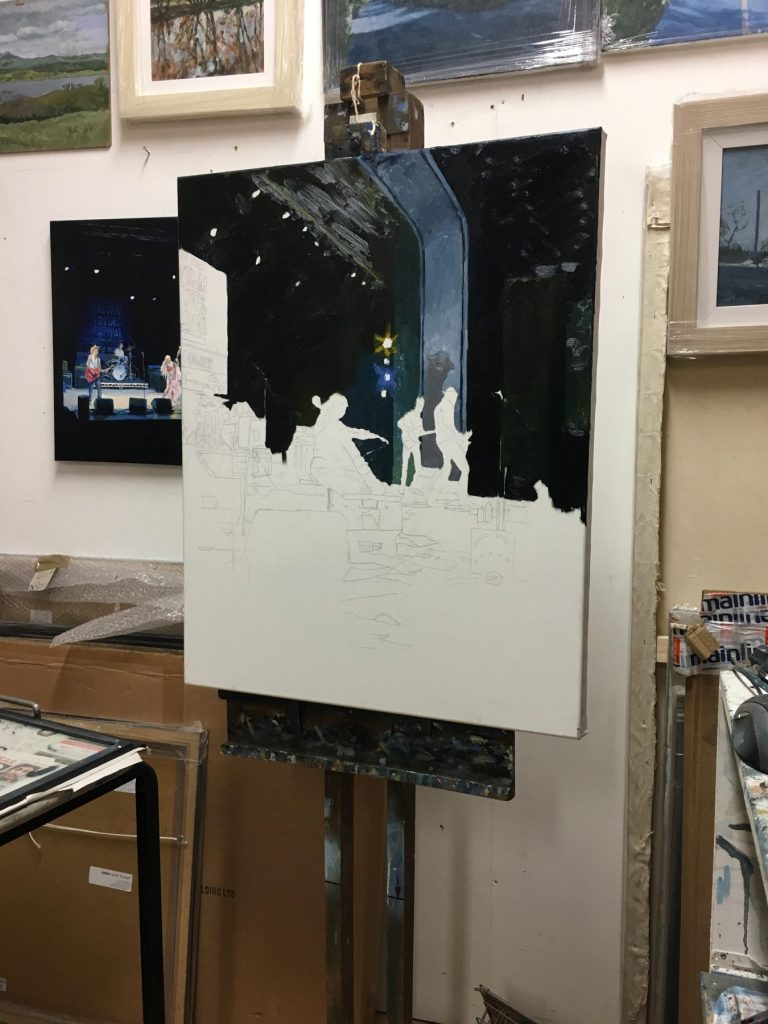 I first started work on this painting long before any paint was applied to canvas. This painting started its life way back in August 2019 when I was sketching, photographing and studying the Troy Redfern Band at The Great British Rhythm and Blues Festival in Colne, Lancashire. The above photograph was taken in November 2019 and shows the painting after two studio sessions. The first studio session involves the drawing in graphite onto the canvas. This session in itself actually follows a fairly lengthy process of studying all the live sketches done during the gig and also all the photographs taken by me at the gig. Using a digital manipulation computer program similar to Photoshop a sort of composite is constructed. This photo-montage represents a synthesis of moments from the band’s performance rather than a single moment in time. Everything is subordinate to the overall mood or atmosphere which results in numerous decisions being necessary during painting. The drawing, whilst important is merely the beginning as changes large and small often follow during the application of paint. The words of the French painter Jean-Baptiste-Camille Corot never seem far from me, “While I strive for conscientious imitation, I yet never for an instant lose the emotion that has taken hold of me.” I will sacrifice anything to express the atmosphere of the live performance. 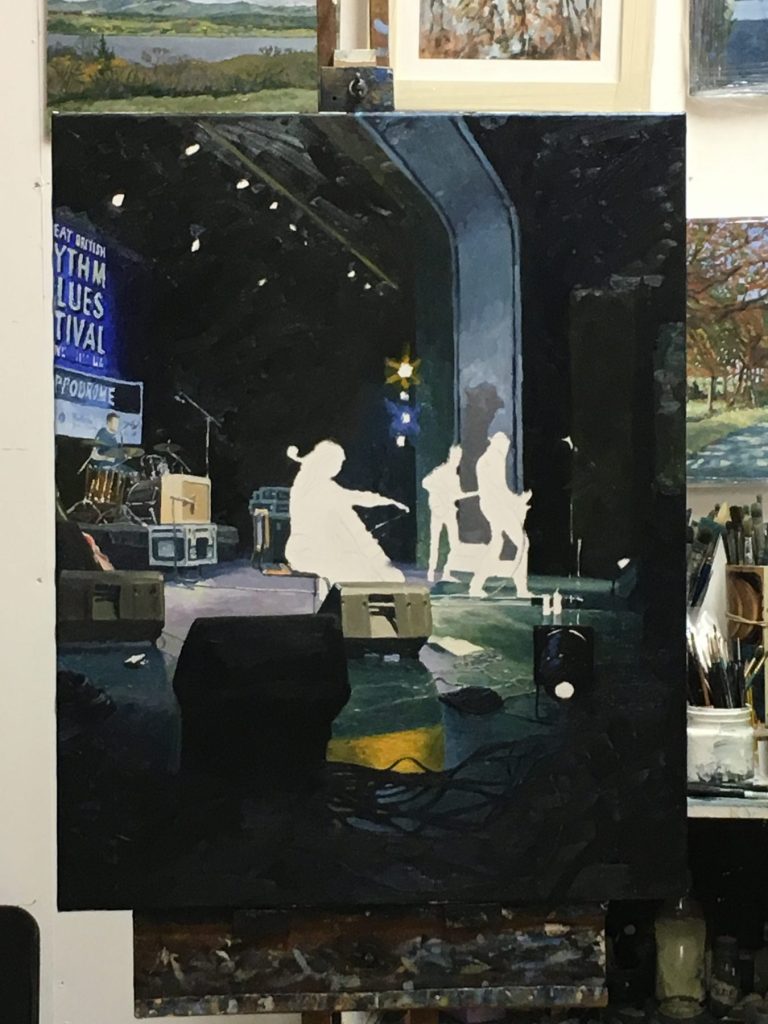 I like to cover the entire canvas with paint as soon as possible but some paintings take longer than others to achieve this. I seem to prefer to block in as much as is possible as soon as is possible. The blocked in areas will change as the painting develops so no area tends to be completely resolved or finished before another. The great French painter Delacroix writes about “blocking-in” in his journal. The painting, therefore, sort of develops as a whole entity rather than small areas being finished completely. It tends to grow as a whole. 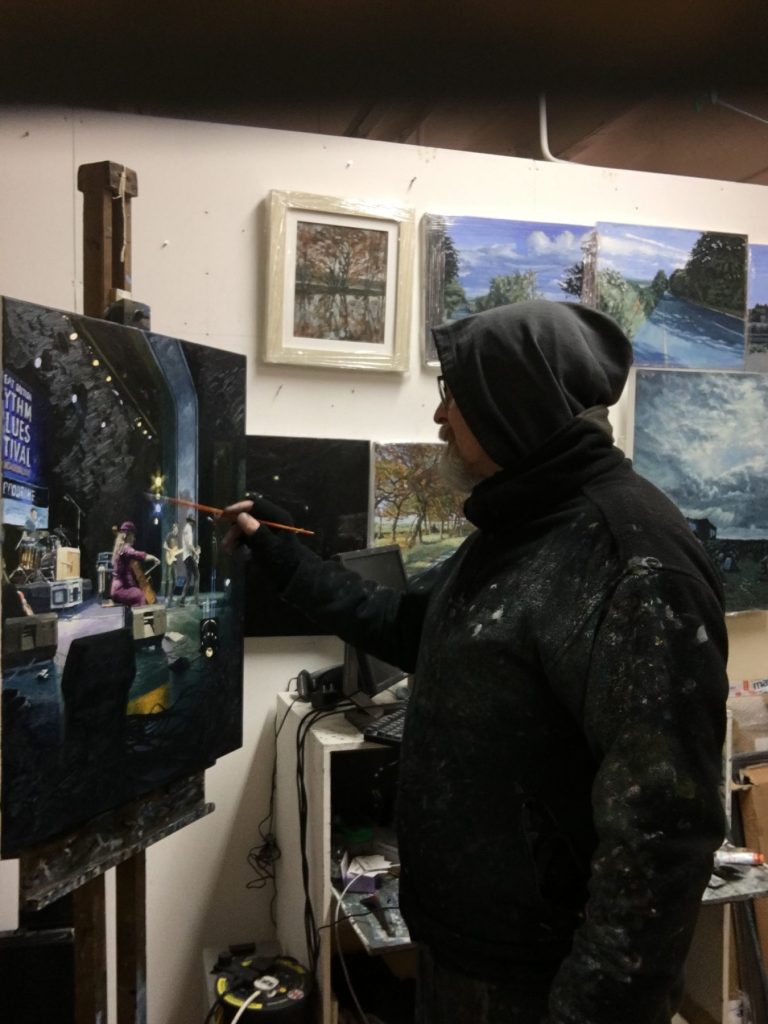 The photograph above shows me at work on a cold day in the studio. By wearing layers of clothes and by staying near my almost prehistoric electric fire I manage to stay warm. I really enjoy working on paintings when they reach this stage of development. There’s some way to go here, but a day at the easel at this stage is usually fulfilling as I work across the whole canvas gradually developing the painting towards its final appearance. 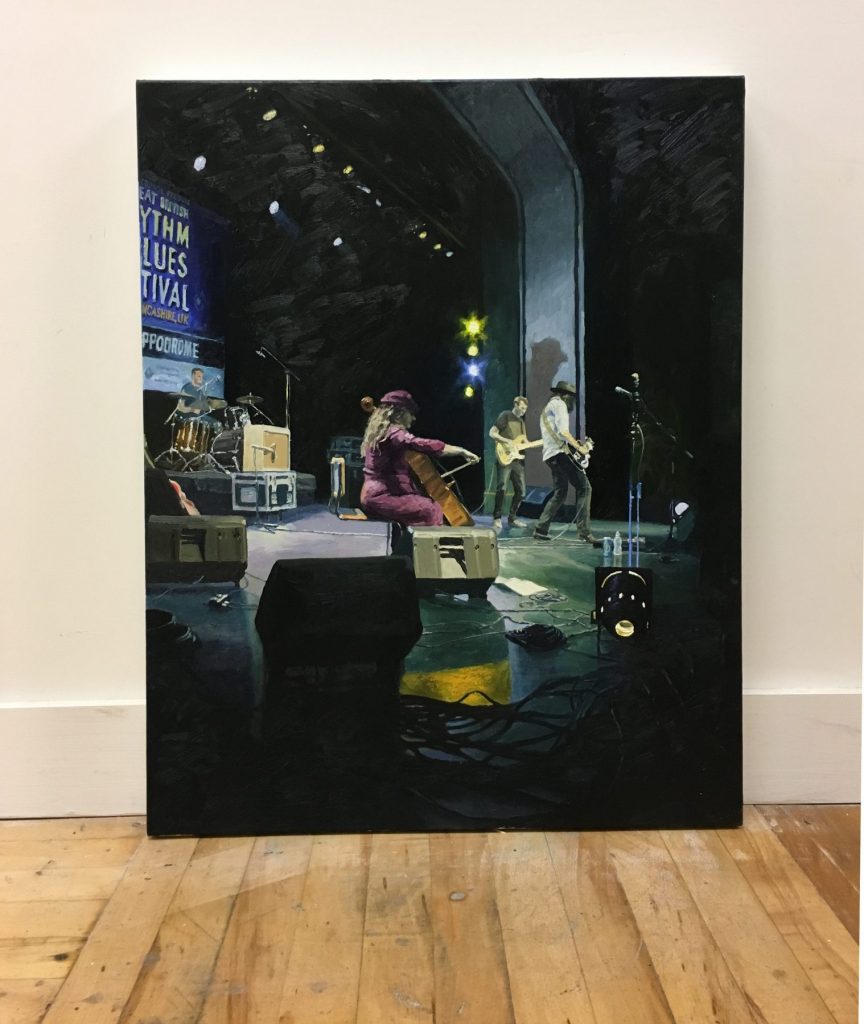 13th January 2020. The finished canvas, still wet from the day’s work which included scumbling, impasto, glazing with a rag and glazing with a brush. These applications resulted in tonal alterations to enhance space and atmosphere, small changes in “drawing” (yes, you can draw with a brush) to improve the pictorial description of form, additions and subtractions in the intensity of hue and one or two quite bold acts, which if they had not worked would have added weeks to the final completion date. Very often one must show the courage to take these calculated risks even if the result could be disastrous…what else is one to do? Leave the painting unresolved? Tinker away for ever and a day in a spirit of safe sterility with the very likelihood that one is negating any spontaneity or freshness?  No, there are times when boldness and confidence must replace hesitancy and timidity even when the danger of spoiling parts of the painting is imminent! Sometimes it doesn’t quite come off and then the air is “blue”, not Prussian nor ultramarine, not cobalt not cerulean not even Michael Harding’s King’s Blue…just plain blue.

UPDATE! 14th January 2020. Overnight I decided that a minor tweak was required….this is the final version….

Here are some close up details: 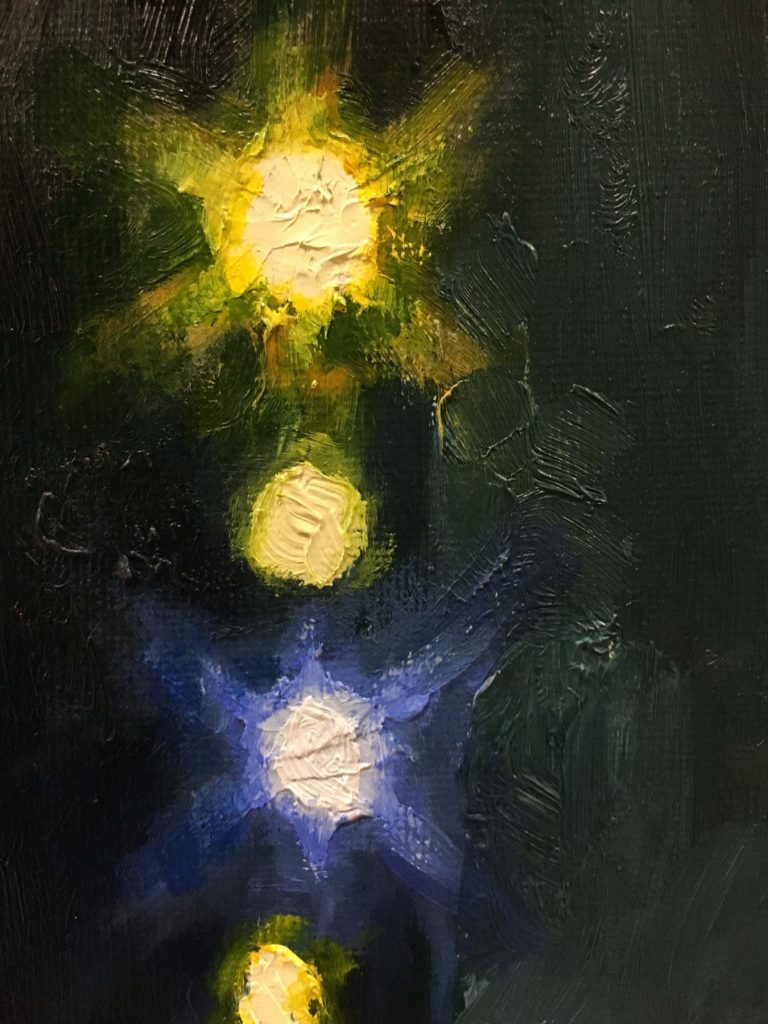 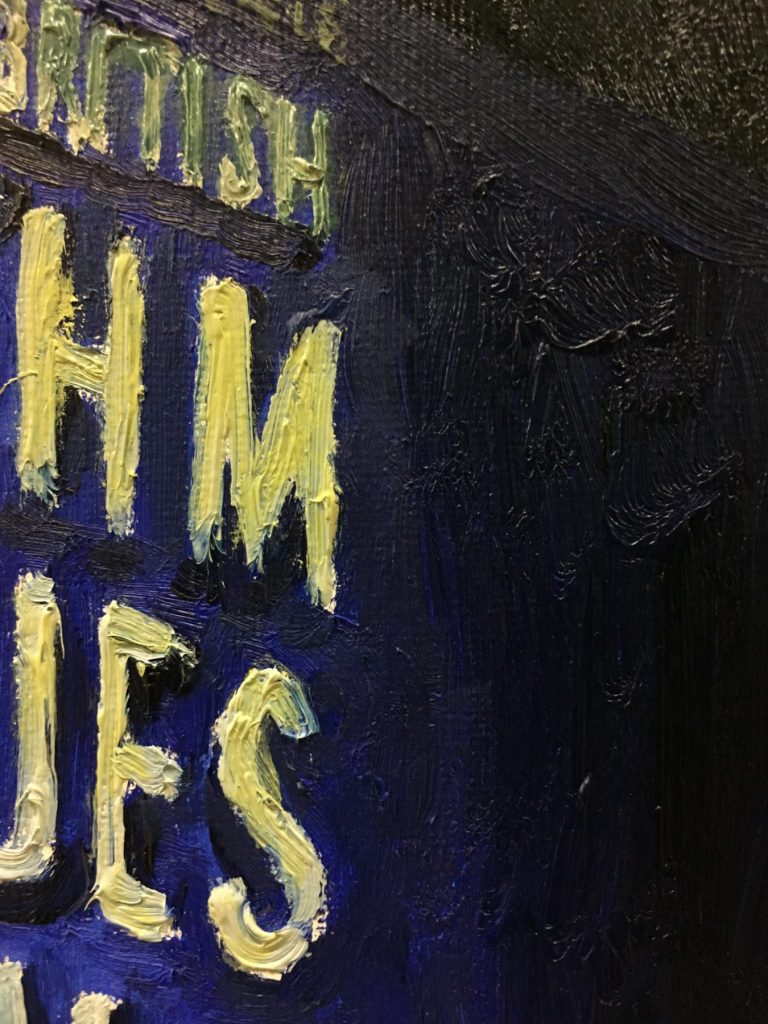 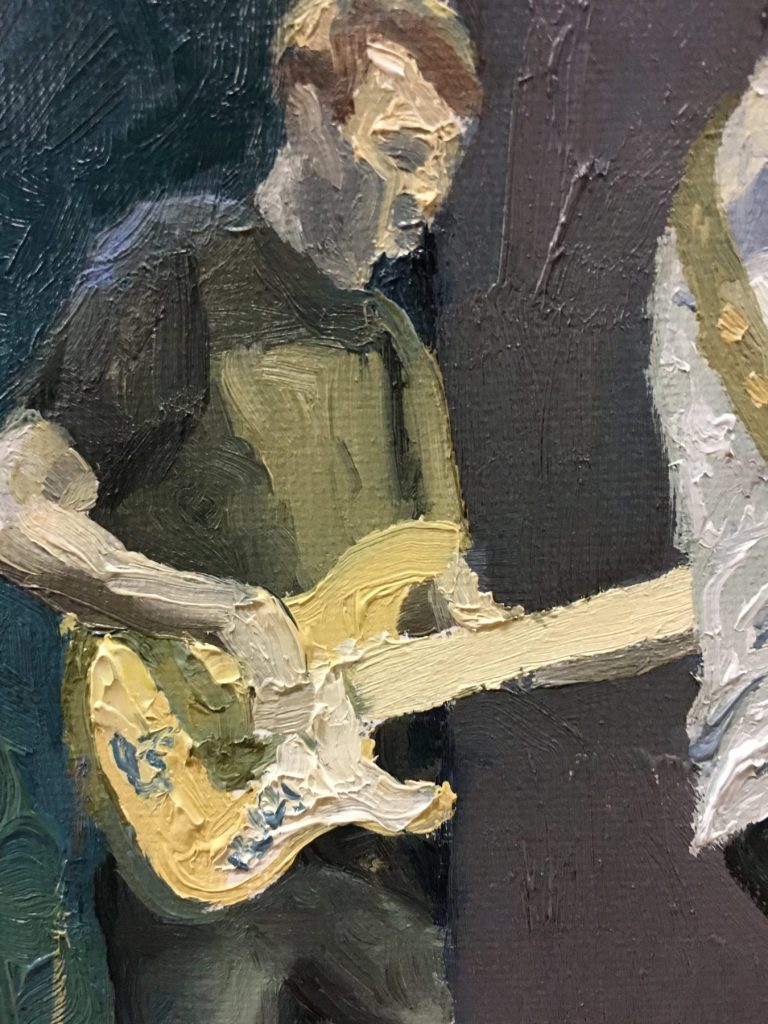 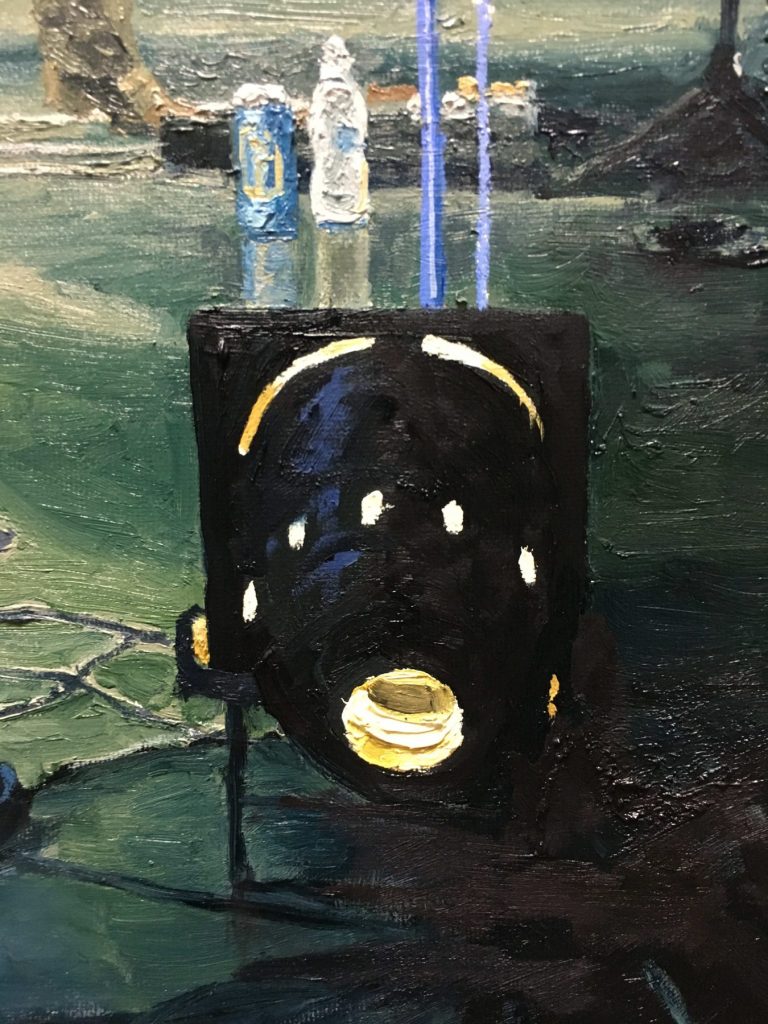 Below can be found the two paintings inspired by Troy Redfern at Colne, from stage right and from stage left: