As “Artist-in-Residence” at the 2017 Great British Rhythm and Blues Festival I produced 14 paintings last year. When I was asked to return as “Artist-in-Residence” to the 2018 Festival I decided to do things a little differently. My work at the Festival did not differ in that I continued to sketch the bands live on stage and take many, many photographs as well as committing much to memory. What did differ was that I began to produce a series of limited edition lino-cuts. This series is still on-going so I’ll post something about them when the series is complete.

Sometime in early 2018 an I had a digital “conversation” with a band member from Backwater Roll Blues Band and a painting was discussed…not exactly a commission but we decided that the band’s appearance at The Great British Rhythm and Blues Festival 2018  would provide me with an opportunity to gather material for a painting..possibly. I write “possibly” because I am dreadfully fussy about what I will paint. I have been to numerous gigs which have been outstanding events as far as the music goes but sometimes the visuals just do nothing for me. This can be down to the lighting, the position of the band members in relation to the lighting or each other, the background, the audience, stage furniture, my position and various other things that somehow stop me from even considering a painting. Happily, The Hippodrome in Colne along with Backwater Roll Blues Band gave me plenty to be pleased about as far as the “visuals” were concerned. A vital ingredient for me is the “feel” or atmosphere or mood of a gig. I HAVE to have been at the concert for me to produce a painting and I have turned down a few commissions because I ONLY paint gigs that I have attended. Backwater Roll Blues Band did not disappoint and entertained us with a rip-roaring bluesy set. I’ve been working on the one and only painting from the 2018 Festival over a few months and yesterday I finally finished it. Here it is 61cm x 46cm, oil on canvas. This will soon be available as a limited edition Giclee print. 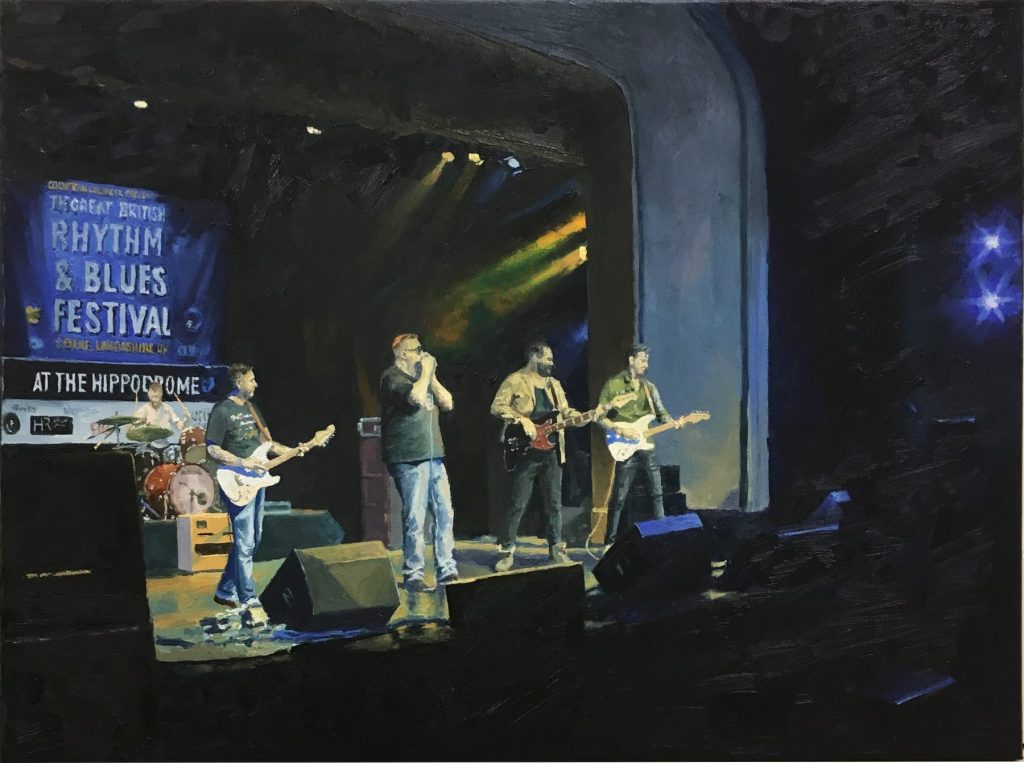