34 years ago, yes, thirty four years ago I was working as Gallery Technician at Ikon Gallery, Birmingham and I helped to install a solo exhibition by Ana Maria Pacheco…it was 1983. There was a little bit of friendly ribbing between the Gallery Director, Antonia Payne (now Professor Antonia Payne) and me regarding the exhibitions that had been shown…I had hitherto been largely unimpressed by them. This I freely concede may say more about me than it says about the exhibitions, however, the Pacheco exhibition changed that. During the two years that I worked at Ikon Gallery the only exhibition that really moved me was Ana Maria Pacheco’s solo show of 1983. I was so moved by her work that I invited Ana to my flat for dinner. My lounge doubled as my studio and it was hardly a salubrious environment…the top floor of a 13 story block of council flats on the outskirts of Birmingham. Happily, Ana accepted and I spent the evening asking all sorts of questions about how she made her sculptures, from where she sourced materials….and much more. At the end of the evening I walked Ana to the bus stop where she caught the bus back into the centre of Birmingham where she was staying. Other than seeing her work from time to time that was the last contact we had.

Last week on arrival in Galway, Ireland, my wife, Mel, and I discovered that our holiday overlapped with part of the Galway International Arts Festival. On closer inspection of the wide variety of events I was delighted to find that there was to be an exhibition of Ana Maria Pacheco’s work. Earlier in the week we spent some time looking for the location of the Festival Gallery on Market Street, Galway but we had no luck in finding it. Eventually we learnt that the reason that we couldn’t find the Festival Gallery is that it is a kind of “pop-up” gallery and we were assured that it would be there on Monday! Today, the opening day of the show (Monday 17th July 2017), was the only day we could visit the exhibition as our ferry leaves tomorrow (18th July 2017).

Mel and I visited the Festival Gallery this morning and the sculpture and printmaking from Ana Maria Pacheco provided us with a lasting impression. I was so pleased to see this solo exhibition of more recent work. I asked one of the gallery attendants if the curator of the show was available and I was soon introduced to Susan and Bernard who work closely with Ana. Imagine my surprise when I was told that Ana was indeed in Galway! Also, Susan had worked with Ana during the show 34 years ago at Ikon Gallery! Ana is only in Galway for a couple of days or so but a meeting was arranged at the Meyrick Hotel and later on we met up for the first time for 34 years! 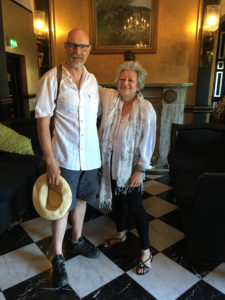 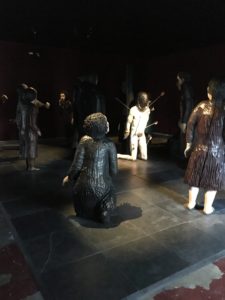 Big, big thanks to Susan and Bernard for arranging the meeting and of course big, big thanks to Ana for fitting me into her busy schedule! It was lovely to chat again and the mention of Vivien Lovell and Antonia Payne brought many memories flooding back. Be sure to make an effort to see this exhibition 17th-30th July….you won’t be disappointed!