The winning bid for the print of my painting, “Good Time Boys“, raised welcome funds for Bolton Hospice in memory of Steve Bradshaw. I collected the print from Newcastle’s The Biscuit Factory Gallery last Thursday (on my way to delivering paintings to a gallery in Scotland). On my return journey south I delivered the framed limited edition print signed by Francis Rossi to the winning bidders. Here’s a photograph of them with the new addition to their international art collection. 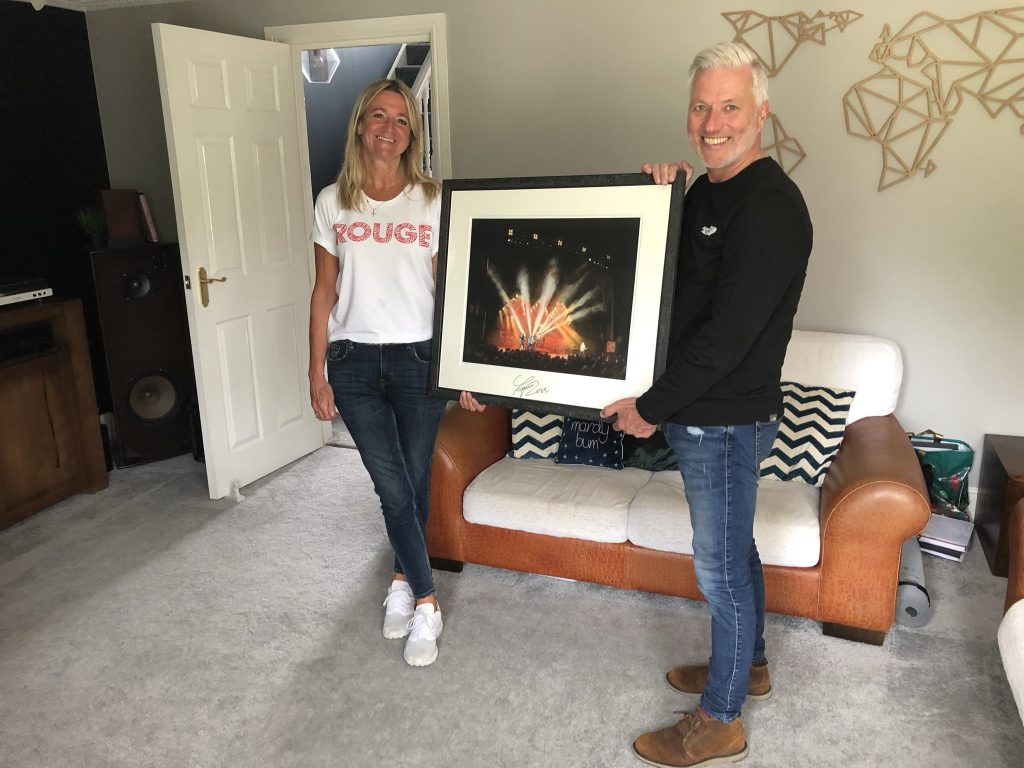 Huge thanks to Linzi and Neil, Bolton Hospice, John Cullen and to Steve Bradshaw’s family for allowing this to happen. Special thanks to Ilona and of course Francis Rossi for agreeing to sign the print….what a difference this made to its desirability. Thanks and commiserations to all the unsuccessful bidders but be assured that it is going to a true Quo fan to hang amongst a variety of art in his home in the north of England.

For those who do not know the story..:

The print was on display at The Biscuit Factory in Newcastle upon Tyne, the UK’s largest independent contemporary art, craft and design gallery. The limited edition piece is printed on Hahnemuhle Fine Art paper using UV light fast inks, and is the same size as the original (oil on canvas) painting.

The unique framed print was available to bid on the Bolton Hospice eBay online shop from June 18-27, 2021, with 100% of the money raised going to Bolton Hospice, enabling them to provide expert care and support for local people facing life-limiting illnesses, and their families. A framed limited edition of a Status Quo gig inspired painting is being auctioned in memory of local fan, Steve Bradshaw. The ‘Good Time Boys’ print is even signed by frontman Francis Rossi, and will raise money for Bolton Hospice. Steve was a big Status Quo fan, going to concerts in the 70s with his cousin, and went to the April 6, 2014 ‘Frantic Four’ Reunion concert at the Manchester Apollo. He attended the gig with his friend John Cullen, who brought along his friend, local artist Pete Marsh. After the concert, Pete produced an oil painting inspired by Status Quo, entitled ‘Good Time Boys’.

In the summer of 2015, Steve was diagnosed with terminal brain cancer and spent the first three months of 2016 in the care of Bolton Hospice. Steve was a husband, father to two lovely daughters, son, brother, uncle, and friend to many. After Steve’s passing, John and Pete arranged to have the limited edition print signed by Status Quo founder member Francis Rossi, with the specific idea of auctioning the artwork to raise funds for Bolton Hospice. The limited edition print signed and editioned by artist Pete Marsh and signed by Francis Rossi!