I owe a huge debt of thanks to Chris Rivers who sorted a Photo Pass for me for the Rews/Avatar/Halestorm gig at O2 Manchester Apollo. Chris (former drummer with Heaven’s Basement) rents a studio just two doors down from my own studio at FaMAS Gallery and Studios but through his music contacts he arranged the Photo Pass for me. It was back to my old stomping ground in more ways than one, for I used to work on the crew at Manchester Apollo….waaaay back in 1986/7…but this night I was in front of the stage rather than behind it!

It has been a busy time since seeing Rews play at the Apollo. I have been trying to complete a painting and eleven lino-cuts from my “Artist-in-Residence” at The Great British R&B Festival, Colne 2018, a painting inspired by Dan Patlansky as well as been inspired to produce work featuring Rews, Avatar and Halestorm. The Colne Blues festival work was completed a few weeks ago and I have been able to spend more time on the Rews, Avatar and Halestorm canvasses. 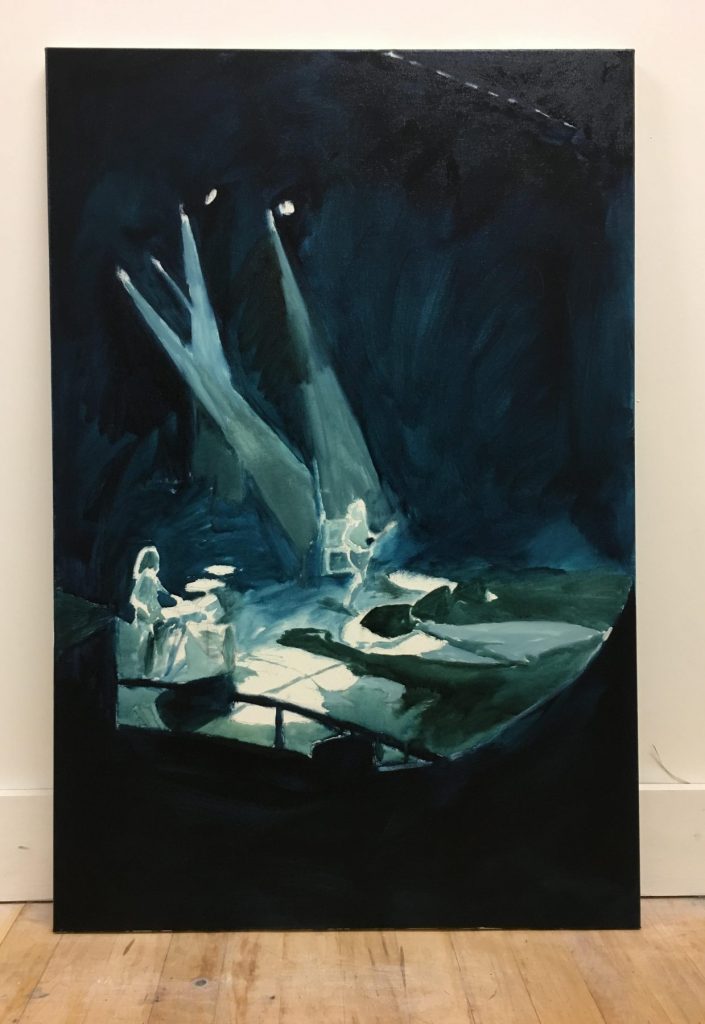 The first three weeks of January 2019 found me sketching in Australia where I was visiting my son in Bondi! But on my return to my studio in the north west of the U.K. (a tad colder than Bondi Beach!) I was able to develop the Rews/Avater/Halestorm paintings. Below can be seen Rews in the centre with unfinished paintings of Avatar and (just about) Halestorm on the other two easels. The unfinished Dan Patlansky At The Met hangs on my studio wall just behind Rews. 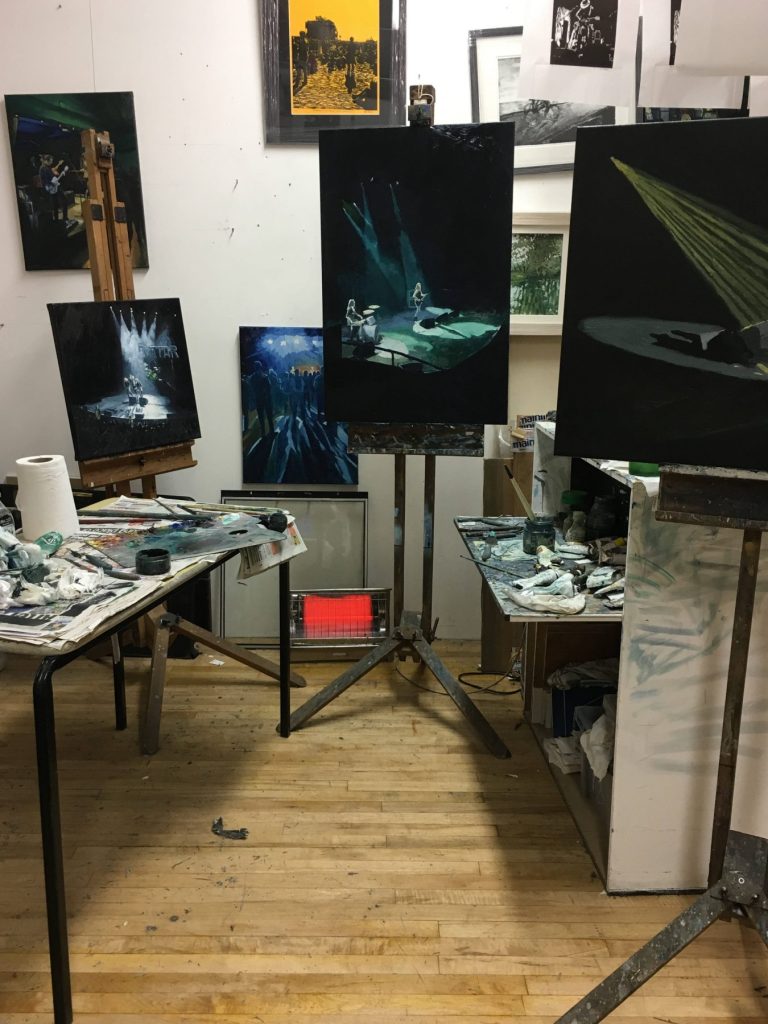 I often have a number of paintings on the go at the same time. This enables me to work on one whilst another is allowed to dry ready for the next stage. Whilst I regularly work alla prima (wet on wet) there are times when the under-painting needs to be dry before wishing to proceed. Scumbling with a dry brush or glazing with thin translucent coats requires the underlying paint to be dry and it is no fun standing around watching paint dry…always better to have something else on which to work. For that reason the Dan Patlansky, Halestorm, Avatar and Rews paintings have been developing along together with the first four reaching their conclusions….leaving Rews to be completed. 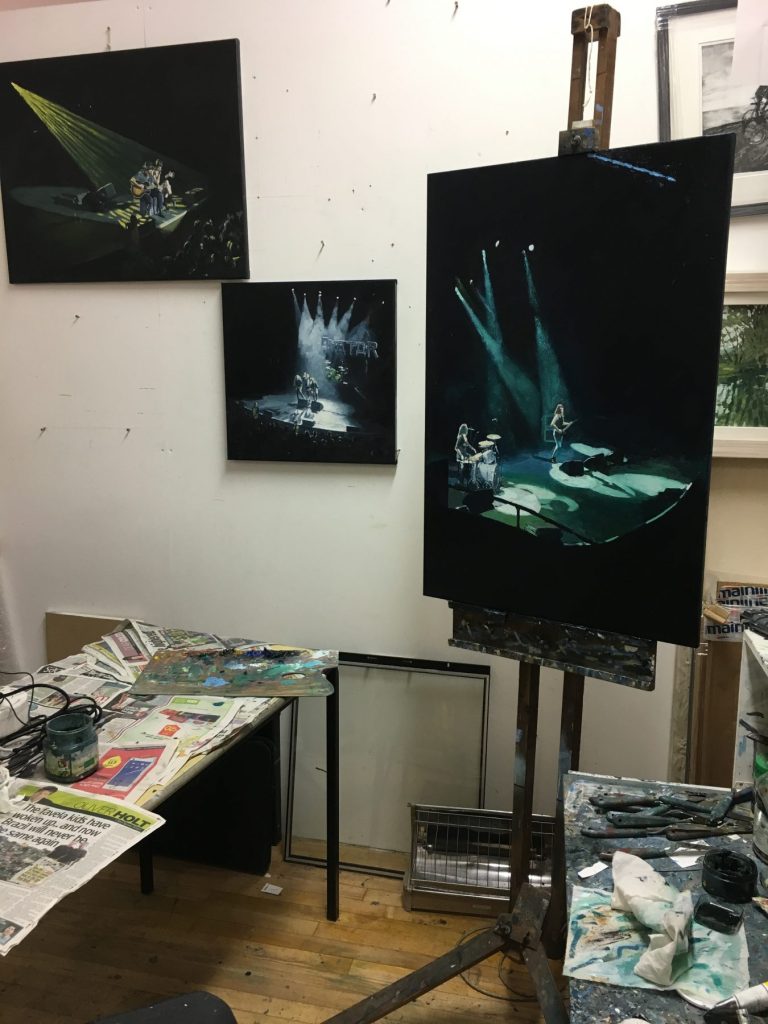 On the easel today (and yesterday) has been Rews…here it is still UNFINSHED with the Avatar and Halestorm canvasses on my studio wall drying…and finished. The atmosphere, mood, feel, vibe call it what you will, is crucial to my work. The great French painter Eugene Delacroix wrote, “I have said to myself over and over again that painting..is..the bridge between the mind of the artist and that of the beholder. Skilful invention, when it is pleasing or expressive, is art itself. Cold accuracy is not art.” Cold accuracy is all very well, but as Delacroix says expressive or pleasing skilful invention is more important. I continue in my humble way to attempt to express something of the atmosphere that Shauna Tohill and Collette Williams created that night at the Apollo….I’ll return to my easel to continue to smudge paint around until the canvas holds something of their performance. Watch this space.